The Cotonou Partnership Agreement between the European Union (EU) and the Organisation of the African, Caribbean and Pacific States (OACPS) countries, the legal and financial framework that supported the Technical Centre for Agricultural and Rural Cooperation (CTA), was due to end on 28 February 2020.

As a consequence, CTA was also set to close. An orderly closure of the Centre was agreed by the OACPS-EU authorities, with the process to run from March to December 2020. As the negotiations on the future agreement between the OACPS and EU were delayed, the parties agreed on transitional measures to extend the application of the Cotonou Agreement first until December 2020 and later until November 2021. Although the process of closing CTA continued into 2021, the work described in this report was carried out between March and December 2020.

Established in 1983, CTA actively supported agricultural transformation in African, Caribbean and Pacific (ACP) countries for over 35 years, with wide ranging results and uptake of innovative practices in nearly 80 countries. Over the years, CTA adapted its approaches from its original role as a knowledge broker to driving wider investments, promoting innovation exchange on technologies, digital solutions, business models and relationships that have been critical to the sustainable transformation of ACP agriculture and the improvement of food and nutrition security. These decades of investments have yielded impressive results, a strong reputation and a rich intellectual property legacy, most of which is extremely useful to ACP agriculture and the development sector.

Although CTA as an institute will cease to exist, the Centre has made every effort to ensure that its rich portfolio of valuable intellectual assets remain global public goods and continue to be available publicly to those that can benefit from them. As part of the orderly closure process, the Centre’s management instituted a process to take stock of its intellectual legacy assets and plan for their responsible transfer, retention or disposal, in close consultation with EU and ACP stakeholders. This included a comprehensive plan for handling these assets, which was approved by the EU and CTA’s Executive Board.

In preparing and implementing the plan for handling the intellectual legacy assets, CTA was guided by three principal considerations:

The process was guided by a clear set of criteria and conditions for use of the assets, aimed at safeguarding the interest of all parties and minimising the legal consequences for CTA and its stakeholders. A consolidated list of intellectual legacy assets was generated, mainly consisting of assets that were generated within the framework of the 2017–2020 Action Grant Agreement.

As this report shows, the goal of ensuring that the intellectual legacy assets generated by the Centre and its partners would remain publicly accessible and usable has been achieved through a combination of transferring assets either to strategic partners, who will continue to build on them, or to project partners with whom the assets had been generated, according to contractual agreements with those partners, and by archiving and freezing all other intellectual legacy assets such as websites and social media accounts and the Centre’s administrative systems. In doing so, the Centre’s management has ensured that its contractual agreement with the European Commission's Directorate-General for International Cooperation and Development (DEVCO) is honoured, that legal consequences for CTA and its funders are minimised or eliminated, and that global, Dutch and EU regulations on intellectual property rights are adhered to.

CTA may be no more after 2020, but its legacy will live on, for the future benefit of small-scale farmers, fishers and all those engaged in agricultural and rural development in ACP countries and beyond. 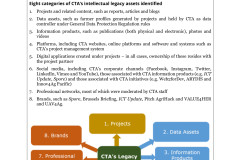 In the run-up to the closure of CTA at the end of 2020, the Centre implemented a rigorous process to take stock of its intellectual legacy assets and plan for their responsible transfer, retention or disposal, in close consultation with EU and ACP stakeholders. In the implementation of most of its programmes, CTA has partnered with a large number of organisations through cost-sharing or grant contracts. The contracts placed ownership of intellectual assets in the hands of partners upon project completion. These assets are mainly project-related information products and IT based applications (including mobile apps). A full list of CTA’s 2016 – 2020 project implementing partners that can be contacted in relation to the assets/projects of interest is here. 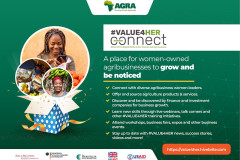 A New Home for Value4HER Connect! Archived Assets handed over to the Secretariat of the Organisation of African, Caribbean and Pacific States (OACPS)

CTA’s web site (www.cta.int) is a rich resource of articles, blogs and portals on specific topics, professional networks and social media accounts that have been archived and transferred to OACPS for safe keeping. The static versions will remain accessible for five years.