Supporting and Scaling Up Youth Agripreneurship in Kenya

This working document present nine articles that discuss the issue of supporting the growth for young agripreneurs in Kenya, with recommendations for stakeholders. Its content goes beyond the VijaBiz project and includes analyses on other youth in agriculture initiatives organised in Kenya. The articles were written by independent authors who responded to a call for articles launched by the CTA and USTADI Vijabiz project. Some of the articles discuss independently VijaBiz project activities focusing on a county or on some groups. Fruit growing in the tropics

With its combination of traditional knowledge and insights gained from research, the aim of this revised text is to foster your interest in, and understanding of, fruit growing. Although it does not highlight specific fruit crops, the text contains a wealth of information for home gardeners, growers interested in supplementing their income from fruit sales, extension workers and other advisers. This study is produced in the framework of activities of the Vijabiz project implemented by CTA and Ustadi Foundation in Kenya. It aimed at establishing rural youth groups’ access and use of different ICT and social media in their agribusiness activities. The study also sought to assess the gaps and barriers affecting the use of ICTs by rural youth in Kenya and provide recommendations. 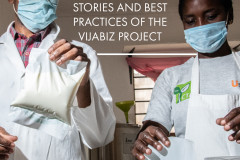 Vijabiz – the Youth Economic Empowerment through Agribusiness project – has been implemented by the Technical Centre for Agricultural and Rural Cooperation (CTA) and USTADI, with main funding provided by the International Fund for Agricultural Development (IFAD). This publication has been produced to promote the rural youth businesses involved, illustrate their experiences and discuss results, as well as to share knowledge acquired on rural youth project implementation. 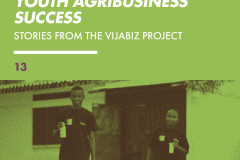 The different cases or stories presented in this booklet are the results from the experience capitalization exercise and give insights into the specific lessons learnt by the workshop participants, through analysis of their involvement in diverse activities of the Vijabiz project and the influence on their businesses.