Nearly 2 billion people suffer from iron deficiency, while one-quarter of the world’s people are at risk from insufficient dietary zinc or vitamin A. Eating a more varied diet provides a greater intake of micronutrients, but this may not be possible for many poor families. However, by using a process called biofortification to improve the nutrient value of specific staple crops, scientists can help farmers grow more nutritious food using the same land and resources.

Biofortification uses biotechnology, conventional plant breeding or agronomy to improve nutritional quality of food. Examples include boosting iron in rice, sweet potato, cassava and legumes; vitamin A in cassava and maize; zinc in wheat, rice, beans, sweet potato and maize; and protein in sorghum and cassava. The method is already well-established around the world – about 20 million people have access to enriched beans, rice, wheat, pearl millet, maize, sweet potato and cassava. By 2030, more than 1 billion people could be eating biofortified crops. For farmers with limited ability to produce more crops, growing biofortified crops on the same land could have a highly beneficial effect on health.

Getting biofortified food onto the world’s dinner plates has been a long journey, requiring flexibility, persistence and dedication. Dr Howarth Bouis and the team at HarvestPlus have led the way and were recently awarded the 2016 World Food Prize for their efforts over 20 years. HarvestPlus has played a key role in developing and distributing biofortified crops and in educating a range of stakeholders about the advantages of crops that are higher in zinc, iron and vitamin A.

Biofortified crops have so far been released in 30 countries and tests are underway in 25 more. “The crops have been tried, tested and proven effective in improving nutrition for people in developing countries,” states Dr Bouis. “The huge job now is getting the farmers to take them up and getting the consumers to eat them.”

Like consumers everywhere, farmers and their families can be cautious about trying new varieties. Persuading them to do so requires targeted information campaigns and time for results to be seen and word to get around. An added complexity is that some biofortified crops look and taste different. But this is not the case in zinc and iron-rich crops, such as beans. In Rwanda, 10 varieties of iron-rich beans have been released, and they are the same in appearance and taste as beans currently on the market. The beans have higher yields as well as higher iron content and researchers hope that they will become the preferred product.

Other crops such as cassava, maize and sweet potato do take on a different taste and appearance when fortified with vitamin A, with the crops turning from white to orange. Communities need the chance to learn about the new products before they decide to grow them or buy them, so information activities must target both farmers and consumers.

In many countries, women are key to improving nutrition and health in their families. For communities to accept the new biofortified crops, women must be engaged at every stage of the process. For example, local people may be employed to spread the word, sometimes holding blindfolded tastings where women are asked which sweet potato or other food they prefer, and whether or not they would buy the enriched product for the sake of their family’s health. If the price is the same and they like the taste — and the word is that the crops are well accepted — women choose the vitamin A-enriched food for their family.

In Namwenda, in eastern Uganda, a group of women wearing distinctive orange t-shirts are spreading the word about nutritious crops, good hygiene and sanitation practices. Known as Mama Ndhisa, the women deliver their messages through activities such as community meetings and visits to local villagers, using pictorial story cards and other aids. The name Mama Ndhisa reflects community affection for these mothers and for the vitamin A-rich orange sweet potatoes they promote.

All the women take part with the support of their husbands. They are held in high regard, explains Aloysius Olweny, Namwenda’s sub-county chief. “Take note of the ladies who are participating, because they are exemplary,” he says. “They also teach others about nutrition … they are moving forward to motivate these people.” Olweny states that encouraging men to support their wives was important for the success of the information campaign. “Men want to be involved in cash crop growing and things like that, but when they see the improvement in income, in health with fewer diseases, they get motivated to help their wife.”

Support from leaders at all levels

For a country to embrace biofortified crops, there needs to be support at every level – locally, as in Namwenda in Uganda, as well as nationally, regionally and internationally.

The Global Panel on Agriculture and Food Systems for Nutrition has urged policymakers to adopt biofortification as one element of a nutrient-sensitive national agricultural research and investment strategy. “Policymakers have a key role to play in tackling hidden hunger,” says Sir John Beddington, Global Panel co-chair. “Biofortification complements the existing mix of micronutrient interventions available to governments.”

In the Global Panel report, Biofortification: An Agricultural Investment for Nutrition, micronutrient malnutrition is shown to be associated with the rapidly growing problem of obesity and non-communicable diseases. The authors state that low-quality diets based heavily on highly processed, nutrient-poor foods lie at the core of the problem. “When biofortified crops are combined with interventions that promote dietary diversification, real progress can be made to benefit millions of households. In Nigeria for instance, with the strengthened regulatory and legal framework and infrastructural support, Nigerian multiplication programmes are expected to allow 80 million Nigerians to have access to more-nutritious diets in the coming four years,” the report said.

The Global Panel emphasises that biofortification should not be looked at in isolation. “Policymakers should not see it as an alternative to other nutrition-enhancing interventions, but consider it as one component of a suite of complementary strategies to reduce micronutrient deficiencies,” the Panel said.

Akinwumi Adesina, President of the African Development Bank and former Nigerian Minister for Agriculture, has called for an end to malnutrition in Africa, saying that the continent has all it needs to win in agriculture. Speaking at the seventh African Agricultural Science Week in June 2016 in Rwanda, he noted that Africa spends €30 billion each year on importing food, a figure that is projected to grow to €98 billion by 2025. “Africa is importing what it should be producing, creating poverty within Africa and exporting jobs outside of Africa,” he said. Any shock to global food production would affect prices in Africa, especially in rural areas, so investing in agriculture makes economic and security sense.

Adesina noted successes in Rwanda, which has drastically reduced malnutrition, and in Senegal, which is on the way to becoming self-sufficient in rice. “And with technologies from science, we can do even more,” he said. New iron-enriched beans, orange-fleshed sweet potato, high-lysine maize and vitamin A-rich cassava are already improving crop yields and nutrition.

In Southern Africa, FAO estimates that nearly 40 million people will be affected by food insecurity in 2017. The chilling figure reflects high levels of unemployment and under-employment, which are exacerbated by the most severe drought in 35 years, which scientists are linking to the El Niño weather event. Most people in the region eat food they grow themselves. Chimimba David Phiri, FAO Subregional Coordinator for Southern Africa, said that “Assisting them to do this will provide life-saving support in a region where at least 70% of people rely on agriculture for their livelihoods.”

As drought continues, prices for maize and other crops have risen. FAO officials warn that 23 million people need urgent support to grow enough food to feed themselves, or they will be dependent on humanitarian assistance until the middle of 2018. Farmers must be able to plant by October 2016. “Failure to do so will result in another reduced harvest in March 2017, severely affecting food and nutrition security and livelihoods in the region,” FAO said.

Agricultural experts say a good harvest is necessary in March 2017 to help families escape the country’s food crisis. “We have had two bad [growing] seasons, and a lot of farmers do not have adequate seeds,” said Phiri. “We need to support the farmers to have the seed that they need for them to grow this season, and also to avoid a problem of having continued humanitarian support.”

In Zimbabwe, many children do not get enough to eat. The United Nations Children’s Fund warned in March 2016 that the country is facing its worst child malnutrition rates in 15 years, with rural areas particularly at risk. FAO is helping the country’s farmers affected by the drought.

Last month, the agency began giving biofortified maize and bean seeds to farmers. Those seeds are designed to produce crops high in valuable nutrients. Initially, the seed programme is targeting about 127,000 small farm households in eight areas. Over time, it will spread to other parts of the country. Farmer Mirriam Chagweja said she is glad she planted the new seeds in her fields in Silobela, about 300 km south-west of Harare. In February 2016 she planted fortified maize and beans, using seeds provided by the UK Department for International Development. Chagweja said she got more beans from these seeds than from the other kinds of beans. “I would encourage others to go on board and join,” she said.

Looking to the future

Trials continue with new biofortified crops and varieties. WHO lists a range of current biofortification trials, including vitamin A-enriched maize for mothers and infants in a range of locations, vitamin A-enriched cassava for Nigerian preschool children and pearl millet enriched with both zinc and iron to boost cognitive ability and immunity to infections in Indian babies. While biofortification and genetic modification are different processes, groups such as HarvestPlus are keeping an eye on developments. To date, HarvestPlus has used only conventional breeding techniques, and not genetic modification, to develop its 150 varieties of 12 different nutrient-enriched crops. This has allowed them to get their crops into use as quickly as possible, in as many countries as possible.

There remain many barriers and political opposition to transgenics, despite the scientific community establishing that the method is safe, says Bouis. HarvestPlus is researching the technology and it may be an option in the future, for example, in areas such as increasing iron levels that have been difficult to achieve with conventional breeding.

Environemental and scientific journalist for press, web and TV 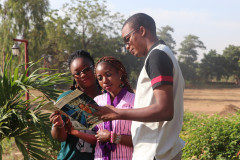 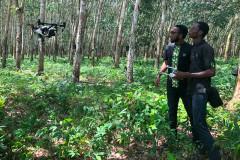 Decoding the potential of agricultural digitalisation in Africa