Over 350 turmeric growers in Belize have registered with an agricultural social enterprise, Naledo Belize Ltd, to supply whole root turmeric for processing into ‘Truly Tumeric’ paste. The crop is grown wild and under cultivation in forests or amongst other crops, and this biodiverse production model makes it sustainable and supports regenerative agriculture. To optimise production, the farmers receive training from the company on how to re-plant small rhizomes (underground plant stems), reduce contamination by herbicides/pesticides, clean roots efficiently and harvest the main part of the root. Turmeric yields over 4,500 kg per 0.5 ha and has a short growth cycle of 9 months, but was previously only produced in Belize in small amounts for hand-processing into powder for local consumption. Farmers registered with Naledo are now producing over 9,000 kg per month.

In 2014, while volunteering in Belize, Umeeda Switlo, CEO of Naledo, discovered that the size of Belize turmeric, Curcuma longa, was larger than other species. After testing it for pathogens and heavy metals, and finding none, she began processing turmeric paste from her kitchen in Canada. Switlo also discovered various nutritional benefits of the Belizean turmeric, for instance, while most turmeric has 2% curcuminoids, which is a powerful anti-inflammatory compound valued for its health benefits, Switlo discovered that Belize turmeric has 7.6%.

The Truly Tumeric paste contains fresh squeezed lime juice, cold pressed coconut oil and sea salt, which makes it a nice addition in smoothies or curries, for instance. “There is nothing on the market like this. Wildcrafted is a step above organic, as the turmeric is naturally grown with no added agricultural inputs,” says Switlo. Reducing environmental impact is important to Switlo, “We produce very little waste as we process the roots whole with the skin on, and the smaller rhizomes are re-planted as seeds. We also work with farmers to ensure that when washing the root, the silt does not go in to the rivers.”

Young people in Toledo are also accessing new employment opportunities through Naledo’s agro-processing factory in Punta Gorda, the capital of the district. Here, all value-added activities take place, from bottling to labelling, and the factory employs 10 people between the ages of 18 and 31 years, including several managers, paying at least double the Belize minimum wage. Naledo employees also receive training in business, bookkeeping, food safety and entrepreneurship.

The Truly Turmeric product reached the finals of the 2018 SIAL Innovation Awards and is currently available in 24 outlets across Belize. The paste is also exported to 650 stores in Canada, including Whole Foods and Choices Markets. Having found a distributor in the Bahamas, Naledo is keen to expand to the rest of the Caribbean and in 2019, the company will begin exporting to the US and will introduce five new beverage products that use Belizean turmeric. 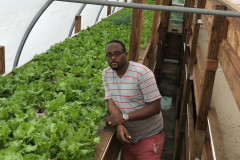 by Sophie Reeve and Natalie Dookie 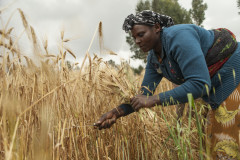