In Tengeru in northern Tanzania, 12 farmer groups are working with a local sweet potato processing company to enhance their incomes and increase the availability of nutritional products for children and adults. Better Markets for Crops Products Limited (BMC) supplies the farmers with up to 120,000 orange-fleshed sweet potato (OFSP) vines and, once the roots have matured, the company buys them back from the farmers at between TSh 200-300 per kg (€0.07-0.12). The roots are then processed by BMC into a variety of goods, including flour, puree bites (OFSP-based noodles or pasta), spice dubbed ‘mchuzi mix’, and OFSP crisps.

BMC works mostly with farmer groups made up of women and youths. The company was founded in August 2016 by Zena Mshana, who carried out her own research into OFSP processing prior to establishing the business. “I was motivated to improve nutrition by promoting consumption of bio-fortified products in Tanzania where there are many cases of stunted growth in the population, due to vitamin A deficiency,” says the entrepreneur, who received training on food safety and quality in small-scale processing from the International Potato Center in 2017.

As well as increasing their incomes, the farmers working with BMC have learnt about best post-harvest handling techniques – such as storing the OFSP roots in wooden boxes to prevent spoiling for up to 3 months – and various home recipes for OFSP-based adult and baby foods. Irene Robert Lukumai is among the farmers working with BMC and, since 2018, has been supplying the company with between 100 and 700 kg of roots per month depending on her production levels. According to Lukumai, having a ready market for OFSP roots has increased her income by 50%. “They also trained me on how to tend the growing vines on the farm and increase my growing capacity,” she says.

In 2016, BMC bought 20 t of OFSP tubers from their farmer network, which increased to 70 t in 2018. In 2019, they bought 45 t from January to April, and each month are processing on average, 8-10 t of OFSP roots into products. Sales of these products generates monthly revenues of between TSh 10-17 million (€3,830-6,525) for BMC, with the flour and crisp products most popular among customers. Around 50% of BMC’s products are sold to supermarkets, 30% through school campaigns and 20% to hospitals. The company currently employs 14 full-time women and youth staff members who are involved in the processing, packaging and distribution of the products, and 5-10 part time staff who are involved in marketing the goods.

Mshana aims to expand the reach of BMC’s OFSP products to five new regions in Tanzania and to supply 100 schools and 10 hospitals in 2021. The company also hopes to expand into Kenya, Rwanda and Uganda by 2025. “We get encouraged to continue our work when we see people’s health improving by consuming our OFSP products,” says Mshana. “The patience and hard work has been worthwhile.” 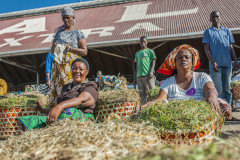 The new African Continental Free Trade Agreement (AfCFTA) is expected to be a game changer, boosting inter-African trade, spurring manufacturing, and creating economic opportunities. But for its benefits to be realised, the details need to be negotiated; and Africa's leaders need to commit to AfCFTA for the long haul.