To resolve the ‘disconnect’ between smallholders and markets, and reduce transport costs and produce losses for farmers, an efficient and transparent online auction system has been established in Zimbabwe.

A first-of-its-kind, unique online auction system in Mutasa, eastern Zimbabwe, has reformed agricultural marketing in the area by helping to facilitate trade between smallholder farmers and national markets. The Mutasa Auction Floor (MAF), which started operating in May 2016 with support from NGO, Help Germany, and Zimbabwe’s Department of Agricultural, Technical and Extension Services, is administered by agricultural commodity company, Farmers Intersection. When the auction commences, only registered buyers can bid for the products on offer in real-time, via the internet. Once a sale is made, the sold product is dispatched to the nearest major town for delivery or is linked with other transport mechanisms for national distribution.

Prior to the introduction of the platform, many farmers in Mutasa struggled to find a ready market for their produce, forcing them to travel hundreds of miles to Mutare, the nearest major town, or Harare, the capital, where they often received reduced prices from middlemen. In many cases, farmers’ produce would rot by the roadside as they waited for transport or opportunistic buyers. However, Sam Case, director at Farmers Intersection says, since its introduction, the auction floor has reduced farmers’ field-to-shop time and enabled them to deal with one buyer, providing an easy and efficient market.

Farmers have welcomed the system because it has localised the market and allows for the almost immediate sale of their produce, whereas before, it could take over a week to transport and sell their goods in the cities. “Payment per week through mobile money has been excellent. It is a good concept and has been very helpful to the community. It has brought hope and the availability of a market to farmers,” says Moses Simbi, a supplier of oyster mushrooms to the Auction Floor. “MAF has minimised our transport costs because they can even collect from our farms. The Auction Floor has also employed local people to load and offload the produce, which gives employment to locals,” Simbi continues.

In total, 319 farmers have sold through the Auction Floor between 2016 and 2017, while 1,010 farmers participated in the pilot phase. Produce worth 96,580 kg valued at around €26,000 has been sold through the system. Case says the ‘low tonnage’ of sold products is due to a multiplicity of operational setbacks that have included farmer production patterns being out of sync with the market, resulting in gluts and scarcity of commodities. To resolve such challenges, MAF is working with the Mutasa district council to increase dissemination of market information among farmers to avoid such discrepancies, and on a marketing strategy to increase the number of farmers selling their produce in the second year by 50%.

For the future, MAF plans to have one auction floor in every district of Zimbabwe. “Many districts have already expressed an interest. We hope to soon concentrate on other areas and products of interest, such as Honde Valley for bananas, Nyanga for potatoes and Gokwe for carrots and honey,” Case explains. 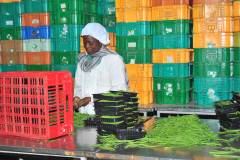 In 2013, stringent standards for exports into the EU caused a hike in rejected produce from Kenya – and a huge blow to its horticulture industry. Now, a digital traceability system is helping to rebuild the sector, providing precise accountability from field to export.