In 2013, stringent standards for exports into the EU caused a hike in rejected produce from Kenya – and a huge blow to its horticulture industry. Now, a digital traceability system is helping to rebuild the sector, providing precise accountability from field to export.

Over 3,000 Kenyan farmers of fruits and vegetables contracted for export – the majority of them smallholders – have embraced a digital cloud-based system that tracks produce from farm to fork, ensuring accountability to consumers while reducing rejections at the market. Known as the National Horticulture Traceability System, the innovation was introduced by the Ministry of Agriculture with financial support from USAIDin September 2016 to help restore confidence in Kenya’s exports among international markets, where food production standards are becoming increasingly strict.

The system was developed following a wave of Kenyan produce being intercepted at EU borders and subsequent import cancellations in 2013 – French beans and peas, in particular, were found to contain high residues of agrochemicals and pests. Failing to heed numerous warnings from the EU, to which it exports 80% of horticultural products, Kenya was hit with a 10% mandatory inspection order for beans and peas at all entry points. “That was one of the most damaging moments for the horticulture industry. It meant that a minimum of 10% of our produce had to be checked. It had such a huge cost implication because our exporters were forced to pay for these inspections,” says Jane Ngige, CEO of the Kenya Horticulture Council. As a result, in that year alone, 50% of all Kenyan small-scale farmers lost their jobs due to exporters terminating their contracts, and the horticulture industry lost €29 million in pesticide-testing costs.

The Traceability System can store the details of 1 million farmers and comprises three elements: a mobile application that captures farmers’ details and farm operations; a web reporting portal for the exchange of information among industry players, including regulatory bodies; and a barcode-printing function, which, when scanned, gives access to all of the stored information regarding the produce and the individual farmer.

Once a farmer delivers the produce at a collection point, the system captures their details – including name, farm location, inputs used and information on planting and harvesting. The system then records details of the produce delivered, including its quality at the time of delivery. This generates a tag with a unique, traceable code that is embedded on each batch of produce. These details are automatically updated on the web portal, where they are stored and can be retrieved for referral at any time.

The system has also allowed agronomists, who visit farmers to track their farming activities, to shorten their visiting time and overall workload. Where before they could spend an average of 2 hours at each farm recording the details using paper files and adding the information to the system at the end of each day, visits now take around just 20 minutes and the data is uploaded directly onto the system. As a result, the number of farms an agronomist can cover in 1 day has tripled and their ability to identify production problems, such as the overuse of pesticides, has improved.

“Traceability is about accountability and transparency. We developed this system to ensure that we can easily, promptly and accurately trace a problem to the exact grower, while assuring the markets of our commitment to good agricultural practices throughout the value chain,” says Steve New, Chief of Party at The Kenya Agricultural Value Chain Enterprise, which assisted the programme in rolling out the app to farmers.

Patrick Kirimi, a smallholder farmer who has been growing French beans for export for the last 8 years, was among those heavily affected by the 2013 interceptions. “We were told one day that our produce would no longer be exported because it had a lot of chemicals,” he recalls. He was later introduced to the traceability system through a farmer group he belongs to. “I immediately warmed to it – especially after learning that each individual farmer was responsible for what they grew and would be held liable individually in case the produce was bad. It also means I can easily track my produce as it grows to ensure it meets international standards,” he says.

Ngige says the system has reduced interceptions by over 90%, attributing this to the industry’s opening up of the entire value chain to the buyers, who are able to track how food is being grown and moved right to their shelves. 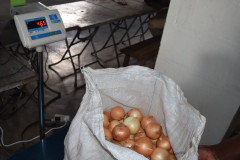 To resolve the ‘disconnect’ between smallholders and markets, and reduce transport costs and produce losses for farmers, an efficient and transparent online auction system has been established in Zimbabwe.