Kati Farms, a fish processing enterprise in Kampala, Uganda, produces a range of value-added niche products, including its well-known fish sausage, using farmed tilapia and catfish sourced from over 1,000 fish farmers. Since 2015, Kati Farms has also been exporting its innovative products across the continent.

Situated in the suburbs of Kampala, Kati Farms was established in 2011 by Lovin Kobusingye with €700 of her own savings. Kobusingye aimed to reduce fish losses and wastage in Uganda by processing farmed fish into a range of value added products. Today, the enterprise is valued at €350,000 and Kati Farm’s flagship product is the fish sausage. Other fish products include fish powder, fillets, loins, oil, samosas, dried and salted sun-dried fish and fish meal for pets. “All the fish is used productively. We don’t have any waste, including the fins,” emphasises Kobusingye.

In order to establish her business, Kobusingye received technical training in 2011 on fish-based value addition from Uganda’s Ministry of Agriculture Animal Industry and Fisheries. After presenting her business plan, she was also incubated at the Uganda Industrial Research Institute for 8 months and allowed to test her fish processing ideas using their equipment. She also received training on corporate governance by Oxfam.

The first batch of fish processed by Kati Farms was supplied on credit from fish farmers Kobusingye had previously connected with, and initial production began with 100 kg of fish sausages daily. The enterprise currently uses farmed tilapia and catfish sourced from over 1,000 farmers around Uganda, who supply Kati Farms with 15,000 kg of fish each month. After processing, Kati Farms sells 7-10 t of value-added fish products monthly to around 68-80 clients including supermarkets and restaurants around Uganda, as well as street vendors.

In addition, in March 2016, Kati Farms opened its first own branded outlet in Kampala, where customers buy pre-processed products, or sit down at the café to buy and eat various fish snacks. Since 2015, Kati Farms products have also been exported to Burundi, the Democratic Republic of Congo (DRC), Kenya, Rwanda, and Tanzania. For customers in regions like DRC where transporting raw fish can result in spoilage, Kati Farms have introduced salted sun-dried fish which last for over a year without refrigeration. “You have to keep on innovating so that you are not outdated, and researching in order to maintain the quality of the product,” says Kobusingye.

To support farmers who supply them with fish, Kati Farms also conducts training on feeding routines, daily feed rations, feed formulation for better productivity, and proper storage of fish in ice to ensure they are delivered unspoiled. For a small fee, Kati Farms also hires out more expensive equipment, which some farmers might not be able to afford or only use occasionally, like fish nets and oxygen cylinders, and water transportation tanks for delivering live fish to the fish marketing centre.

Currently, Kati Farms has 38 staff, including 28 women, but another 500 people are indirectly employed including delivery staff and street vendors who sell the fish products. To increase their distribution, Kati Farms plans to open more branded outlets within the Eastern African region to sell products directly to consumers. In Kenya, the first branch will be opened in September 2017 in Nairobi. As demand for products increases within the region, Kati Farms aims to work with 2,000 fish farmers.

Since founding Kati Farms, Kobusingye has learned the best way for running a successful African enterprise is to work with locally available resources. “I innovated around what was here in order to find solutions for Ugandan people, using Ugandan products,” she says. 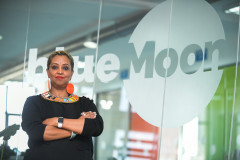 Don’t leave technology to the men