With bundled financing, insurance, advice and access to inputs, Apollo Agriculture has been supporting small-scale maize farmers since 2016. To access a loan from Apollo Agriculture, farmers send a free message to a USSD code; the company then uses data collected by field agents, as well as satellite imagery, to map the location and size of the farm and create a unique profile of each farmer. Using machine learning models that process this data, Apollo Agriculture automatically evaluates each farmer’s creditworthiness and, once approved for a loan, customers pick up their financed inputs at their nearest agrodealer. Each loan is also bundled with insurance in the event of yield losses.

Pre-recorded interactive voice response (IVR) calls deliver content on farming techniques – developed by Apollo Agriculture’s agronomy team – to farmers’ phones, enabling the company to engage with farmers, regardless of their literacy level or remote location. Outstanding questions and/or concerns from farmers not addressed in the IVR calls are answered by calling a toll-free call centre. The bi-weekly calls are often made later in the day, when farmers are generally finished with their farm duties, but customers can request a call-back at a time that is more suitable to their schedule.

Maize and bean farmer, Alfred Ayoko, recollects how instrumental the calls were in rescuing his maize during a Fall Armyworm invasion in 2018. “When the worms invaded our farms and started wiping out our produce in record time, Apollo Agriculture sent us advice on how to control the pest through simple practices like intercropping [beans with their main maize crop]. They were also very swift in assisting us with access to pesticides [in the form of an add-on loan] from the companies that they partner with to tame the spread,” Ayoko recalls. He adds that the voice calls have filled a gap left by extension officers who, as a result of government cuts, have been less available to offer advisory services to farmers.

Benjamin Njenga, co-founder and director of operations at Apollo Agriculture, explains that Apollo’s digital approach has reduced the cost of reaching farmers and allowed them to reach more farmers within a shorter period of time. Apollo Agriculture is now expanding into other crops including potato and sorghum, and partnering with more organisations to improve access to markets for farmers. 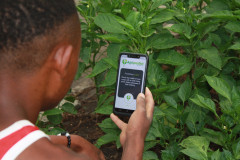 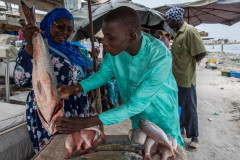 by Vincent Defait and Sophie Reeve

In Côte d’Ivoire, a fundraising platform offers consumers the possibility to financially support small farmers in exchange for harvests at a discount.