Numerous initiatives are emerging in the agricultural community that illustrate the potential profile of future African farmers – as informed business leaders, who make a good living and are connected online – and prove that agriculture offers exciting opportunities for young people.

“Our parents relied on daba hoes and machetes, but young people are not ready to approach farming in the same conditions,” says Léa Boulo, coordinator for the rural development support agency ANADER in Côte d'Ivoire. Africa currently has the lowest level of mechanisation in the world, but things are changing fast. Many initiatives on the African continent are already bearing fruit and provide a composite portrait of the future African farmer – who is determined, online and business-minded.

The image of farmers, who are too often viewed as ‘behind the times’, is changing. At the opening of the 2015 African Green Revolution Forum (AGRF) in Lusaka, Strive Masiyiwa, Zimbabwean chairman and founder of Econet Wireless, declared that if he were to start over again he would still focus his business interests on agriculture.

Contributors to this new image of farmers as agribusiness entrepreneurs also include the Nigerian billionaire and cement manufacturing magnate Aliko Dangote, who has been investing substantially in agriculture. In July 2017, for instance, Dangote announced that he was investing €3.2 billion in the sugar and rice sectors over 3 years with the aim of increasing sugar production from 100,000 t to 1.5 million t by 2020, and boosting current rice production by 1 million t. Additionally, five sugar refineries and 10 rice mills are to be set up in northern Nigeria. But the investor is not stopping there – Dangote Rice will also be listed on the Nigerian Stock Exchange, “when the time comes,” said Edwin Devakumar, Group Executive Director at Dangote. Moreover, the group has invested €680 million to purchase 50,000 dairy cows capable of producing 500 million l/year of milk by 2019.

Agribusinesses or firms associated with agriculture are increasingly being promoted and rewarded by governments, thus attracting the support of investors and mentors. Akinwumi Adesina, since taking office as the president of the African Development Bank has never stopped praising farmers. In an exclusive interview for Spore, he said, “When Africa manages to feed itself, this will be important for the general market and economic stability of African countries, preservation of foreign exchange, transformation of rural areas, and creation of jobs for millions and millions of people. Therefore, agriculture must be at the centre of the economic diversification strategy and wealth creation in Africa. I believe that the future millionaires and billionaires of Africa will come out of the food and agriculture industry – not out of the oil and gas sector – because nobody eats oil and gas.”

Increasing numbers of agriculture-linked start-ups are now being showcased across the continent. For instance, the eFarms platform in Nigeria, which brings together farmers, investors and buyers, was a winner of Pitch AgriHack 2017 organised by CTA during AGRF 2017 held in Abidjan. Farmart Limited, a Ghanaian online fresh produce market and the other winning start-ups – AgroCenta (an online marketplace for agricultural produce) and Bayseddo (an agri-financing platform) – highlight the growing importance of agricultural innovation in modern farming. Congratulating the Pitch AgriHack finalists’ efforts, CTA Director Michael Hailu said, “I salute everyone’s efforts. The innovation among these young people has the potential to energise agriculture.”

Future farmers will not necessarily be born into farming families, but will be more likely to become farmers with greater opportunities to learn the trade and adapt their knowledge and skills to address new challenge as they unfold. Mobile phones will be essential. According to GSMA, the number of mobile phone subscribers in sub-Saharan Africa should grow from 420 million in 2016 to 535 million in 2020, with 40% of them having internet access.

AGRICOLLEGES International, launched in May 2017, offers education courses via its Desire2Learn digital platform. One of its applications measures how fast a student is learning via a smartphone to be able to adjust the pace of training. By using e-learning platforms, the training is less expensive than it would be in a traditional setting and is more readily accessible, substantially broadening the number of agriculture students that could benefit and the likelihood that they will continue their education.

SMS dissemination of agricultural information is another example of this trend. The eShamba programme of the multinational company Syngenta, for instance, disseminates training and advice on good farming practices to 230,000 young farmers in Kenya and Tanzania. Initial results highlighted that these farmers had already noticed a 50% increase in their crop yields and a return on investment of over 125%.

Training is the cornerstone of future farming, and the role of business incubators is growing. For example, the 2SCALE project – whose programme is largely focused on capacity building for farmers, especially women – provides a brokering role to help farmers network with traders, intermediaries and other operators in the value chain. With information, comes content and research, often giving rise to interesting innovations. This is reflected in the partnership agreement signed in August 2017 between the African Agribusiness Incubation Network and the Association for the Strengthening of Agricultural Research in East and Central Africa – agricultural technology can hence be more widely disseminated and promoted amongst farmers.

Future farmers will quite likely grow a more diverse range of crops using intercropping, rotation and/or agroforestry practices. Avocado and banana trees may, for instance, be planted in cocoa plantations to provide shade and protect cocoa trees from excessive heat, drought and diseases. This also enables cocoa growers, “to increase their income by diversifying their production,” says Moussa Sawadogo, cocoa grower and president of the SCINPA COOP-CA cooperative, north of Abidjan in Côte d’Ivoire. For their part, Syngenta and the Africa Rice Center offer rice varieties that produce 20% higher yields than conventional varieties and can be relay cropped with staples such as maize and cereals.

But what will future African farms look like? According to FAO, 80% of food production in Africa currently comes from low yielding farms of less than 2 ha. Although large-scale farms are currently in favour, they are of considerable concern for civil society organisations on account of the land grabbing risk. Alternatives are thus being sought, such as contract farming which is driven by public-private partnerships (PPPs), which are offering a more ‘inclusive’ agricultural model. The process is not new, e.g. both the brewing companies, Nile Breweries Limited in Uganda and Delta Beverages in Zimbabwe, started sourcing sorghum for their brewery needs from local farmers about 10 years ago. The Dangote Group also recently used a PPP to launch its operations in the rice sector in Sokoto state, Nigeria.

Meanwhile a new category of farmers is emerging. These are often people who are interested in farming or getting back to the land, but have had a non-agriculture oriented career. Such farmers are often part of the diaspora who invest in medium-sized commercial farms which they may or may not own. This is the case of the Cameroonian Claudia Ngassa, a banker in South Africa, who decided with the help of the Cocoa and Coffee Interprofessional Council in Cameroon and its New Generation programme, to invest in the cocoa sector. “I’m still working in South Africa, but my project is progressing nicely in Cameroon. I have already planted 6 ha of cocoa trees this year,” says the young novice.

Funding – a traditional nightmare for farmers – is becoming more accessible. In Nigeria, start-ups like Farmcrowdy and Thrive Agric enable middle-class Nigerians to invest US$200 (€170) to US$750 (€637) over a crop season. Their capital is reimbursed and they get a share of the profits after the harvest. The entire interaction is handled online. Farmcrowdy, which was founded in November 2016 and already boasts a network of 1,000 sponsors and 3,500 farmers, offers funding, equipment and technical support for farmers, while providing pre-harvest opportunities to find buyers. Meanwhile, Thrive Agric leases land and signs contracts with farmers to produce specific crops. This start-up is currently collaborating with 300 farmers.

The relationship between farmers and bankers is also changing, especially via mobile banking. In Kenya, the 2KUZE digital platform connects farmers with agents and buyers (see box). Payments are fast and secure, while transactions are more transparent, which enables farmers to better negotiate their share of the final price. The fact that these transactions are listed also facilitates bank borrowing.

These examples also show how new technologies – satellite and drone imagery, meteorological forecasts and soil sensors, which help develop precision farming – will be a mainstay in farmers’ livelihoods. According to the Africa Agribusiness Insights Survey 2016 entitled AgTech – Don't Wait for the Future, Create It, 47% of the surveyed businesses had invested or planned to invest in agriculture via artificial intelligence.

There are already plenty of examples of digital technology being used in agriculture. In February 2017, the French drone manufacturer AIRINOV, in collaboration with CTA, trained farmers from Benin, the Democratic Republic of Congo, Ghana, Tanzania and Uganda on drone operation for monitoring crops, optimising fertiliser applications and mapping crops. In Kenya, UjuziKilimo uses wireless sensor networks, mobile technology and Big Data to enhance productivity. Since 2013, drip irrigation kits provided by the Kenyan company SunCulture have been solar powered, thus reducing irrigation, labour and fertilisation costs. Technology adoption is facilitated via Sunculture’s pay-as-you-grow formula whereby SunCulture advances funds to farmers to enable them to buy a solar pump and, in turn, the farmers reimburse the company once they begin generating a profit. Another example is Zenvus, an agtech business founded by Ndubuisi Ekekwe in Nigeria, which provides farmers with information on their farms and also what is happening elsewhere on other farms.

ICTs are already being widely used in agriculture and becoming affordable and accessible for smallholders. This is crucial. “The future farm may be very large or very small, but at the heart of farmers’ decisions will be a need for a more regenerative use of materials and land,” says Brian Harding, climate change specialist, SNV Netherlands Development Organisation, in a Spore opinion post. He also claims that future tools will boost farmers’ awareness of their environment and help them foresee changes.

A population boom has also led to unprecedented consumer food market growth in Africa which could be worth €1.7 billion by 2025. Here again innovative approaches are emerging. In Senegal, Sooretul (launched in 2014) is an online e-commerce platform for the promotion and sale of local processed items such as juices, jams, semolina, etc., produced mainly by women. Orders may be placed 24 hours a day and customers pay for their orders upon delivery, which is advantageous since many buyers do not have bank cards to pay online.

“While it is still early to evaluate the impacts of the digitalisation of farming systems in Africa, in terms of productivity and improvement of human welfare, there is already a promising trend: technology is making farming exciting for young people,” stated Ekekwe in the Harvard Business Review in May 2017. “As they see that developing mobile apps alone cannot feed Africa, many will turn to farming as a business,” he adds. 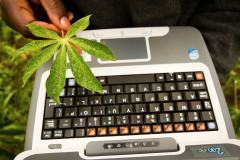 Is the Internet of Things the future of farming?

In ACP countries, the use of smart ‘connected’ devices in agriculture is still at an experimental stage. Yet new projects are emerging, and global trends show how this new technology offers vital development opportunities.