High child mortality and malnutrition in Angola are being tackled through the use of audio messages sent via mobile phones to mothers and carers. Providing mothers with child development, vaccination and hygiene information is proving instrumental in improving the health and nutrition of newborns.

In sub-Saharan Africa, over one third of all child deaths under 5 years (1.5 million each year) are linked to malnutrition, states WHO. However, in Angola, as many as one child in five does not survive beyond the age of five. And many others that survive are severely stunted, failing to grow and develop into healthy, productive adults. Exclusive breastfeeding in the first 6 months of life makes babies healthier and stronger, but only one in 10 Angolan babies under 6 months benefits from this approach.

To help tackle child malnutrition in Angola, and capitalise on one of the highest mobile phone penetration rates in Africa (74 subscribers per 100 people), a mobile health (mHealth) project has been launched by People in Need (PIN), a Czech-based non-profit organisation. PIN previously achieved success with a similar initiative in Cambodia.

“The mHealth project in Angola aims at improving the health and nutrition of newborns, and at reducing child mortality,” explains Claudia Oliveira of PIN Angola. “We send weekly pre-recorded messages, lasting 90 seconds, to mothers and caregivers. The information concerning child development, nutrition, vaccination, disease prevention and hygiene is sent to mothers during the first 6 months of the baby’s life, a crucial moment to improve the health and nutrition of the newborn,” she says.

Traditional birth attendants, who oversee more than half of the births in Angola, generally have a limited education and follow cultural practices which are sometimes harmful to mothers and newborns. However, over 350 attendants have now received training from PIN to improve their good health practice skills, enabling them to attend to mothers and refer them to expert health advice when an issue exceeds their competencies. Those trained will soon receive the first messages concerning neonatal care. By September 2017, PIN expects to reach a total of 60,000 mothers in six municipalities in the Bié, Huambo and Huila provinces. Whilst mHealth projects are becoming more common across Africa, a 2015 study by the GSMA Mobile for Development Foundation in 10 African nations, reveals that only 8% of African mHealth projects, such as this PIN initiative, are nutrition-centered. 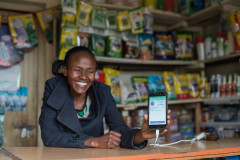