Index-based or ‘parametric’ insurance is increasingly viewed as the most cost-effective way of protecting smallholder farmers’ livelihoods against weather and climate risk. Advances in technology mean weather data is more detailed and reliable. And because farmer pay-outs are triggered by easily measurable events – for example if rainfall in a certain region and timeframe exceeds or falls short of a contracted amount – the cost of sending field officers to calculate and verify losses is removed.

But, while initiatives like the World Bank’s Global Index Insurance Facility (GIIF), which facilitates access to finance for smallholder farmers and micro-entrepreneurs, are expanding steadily – to date, GIIF’s regional partners have covered over 23 million beneficiaries with over €670 million in insurance – making the product profitable without subsidies remains a challenge. Bangladesh-based insurer Green Delta, for example, stated in early 2019 that, while it continues to roll out its crop insurance product under GIIF, it is not yet profitable and still relies heavily on a government subsidy.

Scaling up without increasing costs

Index-based insurance faces a chicken-and-egg challenge. While it relies on scale to reduce per-client costs, the expense of expanding into new regions or markets often cancels this out, notes Rahab Kariuki, chief innovation officer at ACRE Africa.

Tech firms, brokers and insurers are trying to solve this by boosting efficiency, stripping out distribution and other costs, and sharing data and expertise. In Mali, Tel Aviv-based start-up OKO is working to cut costs by distributing index-based crop insurance directly to farmers via mobile phones through a partnership with French telecom giant Orange and insurer Allianz/Sunu. OKO founder Simon Schwall says sending out field agents to markets to explain the product remains an unavoidable expense for now. However, the rest of the process can be completed remotely and has potential for additional automation.

Under OKO’s current beta launch, which uses satellite weather data to offer maize farmers protection against deficient rainfall, farmers who have an Orange SIM card simply dial a code into a basic mobile phone. They then receive a free call-back from OKO to provide a quote based on their crop type, field size and location, and finalise their registration. Once farmers pay the premium –typically 3-6% of the insured value for around 0.5-2 ha of land – via mobile money, they are covered.

Schwall says the crop insurance product – which is not subsidised – has the potential to dramatically reduce client acquisition costs and should become profitable when it scales up to 30,000-50,000 insured farmers, at which point, renewal costs could be as low as €1-€1.50 per farmer.

London-based Skyline Partners is also relying on automation and cost reduction to develop index-based agricultural insurance products that it aims to be fully commercial and self-sustaining without subsidies. Skyline’s model is to partner with agricultural service providers, such as suppliers of agri-tech, data or equipment, to develop insurance products to sell through their existing distribution networks with small and mid-sized farmers, according to co-founder Gethin Jones.

Skyline undertakes all risk modelling on insurers’ behalf, taking responsibility for ensuring that products comply with regulations, are affordable for farmers and have a distribution route, adds co-founder, Laurent Sabatié. By taking this on, insurers’ operational and customer acquisition costs can be reduced, while also allowing agri-tech partners to increase their range of services and competitiveness for farmers, Sabatié explains.

At the time of speaking, Skyline said it was on the brink of signing up distributor and insurer partners for a pilot for pomegranate farmers in Maharashtra, India as well as pilots for mixed crops in Madhya Pradesh and tea in Assam, all insuring against adverse precipitation and temperature. Skyline is also in talks with a potential distribution partner for a similar pilot in Côte d’Ivoire and ultimately plans to roll out the service globally, says Jones.

Scale is the path to profitability

Reaching scale is critical to making index-based insurance commercially sustainable for private-sector providers, according to Carlos Boelsterli, CEO of Microinsurance Catastrophic Risk Organisation (MICRO), an established designer and implementer of climate-risk-related insurance solutions. “For MICRO, the magic number is just above 300,000 clients,” he says.

In the last few years, MICRO has been expanding into Central America, launching a pilot in Guatemala in early 2017 to offer index-based insurance against drought, excess rain and earthquakes, which it introduced in El Salvador in July 2018. It currently has more than 15,000 clients in these two countries. Over the next 3 years, MICRO will expand into Colombia and two more countries that are yet to be confirmed.

Data sharing and collaboration could prove one way of achieving scale, reducing costs and therefore achieving low- or no-subsidy profit more quickly, states Kariuki at ACRE Africa. While ACRE has invested in buying its own weather stations and ground station, this is not affordable for most start-ups, she notes.

ACRE would like to help share its technical skills, especially related to pricing, with more start-ups and even farmer aggregators, Kariuki says. One option is to develop an IT platform or enterprise resource planning software which insurance distribution specialists like OKO – which is already in talks with ACRE – could use to source real-time price quotations for offering insurance in specific locations. This would help ACRE expand, including beyond its current focus of Eastern Africa, while helping the whole industry scale up. “If we’re the only ones who can do this, the market is not going to grow,” says Kariuki.

While moving away from subsidisation remains a long-term aim for the agri-insurance market, government investment is still required to raise awareness about the product. And, with women consistently accounting for more than 60% of ACRE Africa’s customers, identifying women’s groups to receive education might yield the best results in terms of insurance up-take, argues Kariuki. While on a small scale, ACRE’s experience suggests that women may be more open than men to experimentation with new products. Their relatively high participation in savings groups also makes them more likely to have money available for insurance premiums.

ACRE is, however, currently studying the possibility that agricultural insurance may be negatively impacting household nutrition. When insurance helps a farm thrive, some male smallholders may be encouraged to expand their business by taking over the small plot typically cultivated by women as a kitchen garden to use for commercial farming, she says. 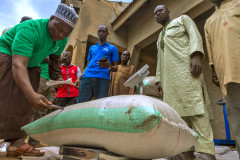