In Cotonou, 23-year-old Aldred Dogue sells pre-prepared, ready-to-cook vegetables that have been washed, cut and frozen straight from the field, to some 20 supermarkets. “Most of my customers are people who work, who do their shopping in supermarkets and who have a certain amount of buying power,” confides Dogue, who targets middle and upper-class consumers.

The young entrepreneur has taken his time achieving his ambitions. “I started with carrots, green beans and cabbage. I made product prototypes that I proposed to supermarkets," he explains. “In the beginning [2017], I was processing barely 200 kg a month." Two years after its launch, Africa Food Mill transforms nearly 2 t of vegetables every month, which are bought from some 300 small-scale farmers grouped into four cooperatives. "We have a contract - I'm a regular client for these farmers and I only work with them. We agree on a price that suits them and that suits me," says Dogue.

While studying nutrition and food technologies at the Université d’Abomey-Calavi, Dogue was also working with farmers whose produce was perishing before reaching the market, and who asked him to help reduce their post-harvest losses. "I carried out a market survey and realised that there was a potential for ready-to-use vegetables," explains the young entrepreneur, who started buying the producers' unsold vegetables. “Even though their sales problem is not totally resolved, I think that I am a safe solution for them.”

Dogue has several national and international distinctions to his name. In August 2017, 3 months after launching Africa Foods Mill, he received the Best Business Plan Award from the Young People’s Chamber of Commerce in Benin, along with 500,000 FCFA (€760). In 2018, he was awarded the Anzisha prize worth 7,500 USD (€6,800). The acclaim of winning the awards has helped him reach out to potential investors, and the prize money has gone towards renting a space so that he no longer processes the vegetables from home.

Dogue acknowledges that there are still challenges to overcome. “I still don't have the packaging I want. When I compare it with imported products, I don't think 'its' quite there yet. The goal is to get in touch with a company that can provide packaging that best promotes my products," he says.

In the near future, Africa Food Mill hopes to raise around €253,600 to establish a factory. “At the moment, we’re doing almost everything by hand, so output is not yet on par with demand. I also want to be able to start transforming fruit such as mango and pineapple into dried fruit and juice," he explains. His ambition is to enter the Nigerian market with his vegetables within the next 5 years. “I've planned to buy refrigerated lorries for that. And after 8 to 10 years, I will replicate my model in other countries.”

Inoussa Maïga is director of MediaProd and president of Burkinabé Association of Agricultural Journalists and Communicators in Ouagadougou, Burkina Faso. 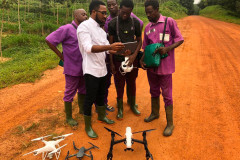 Farmers eyes in the sky in Cote d’Ivoire