To provide communities with sustainable access to fish and counteract the impact of the recent Ebola virus outbreak in 2014, which almost halted agricultural production, WorldFish is working in Tonkolili district with the Ministry of Fisheries and Marine Resources (MFMR) to build fish ponds.

Fish accounts for 80% of animal protein consumption in Sierra Leone, yet FAO figures show that only 2% of marine fish make it to inland rural markets because of poor road infrastructure, a non-existent cold chain, and a fish product market that remains in its infancy. People living inland have therefore been confined to small subsistence fish farming, and an aquaculture sector that is still suffering from the effects of the 1991-2002 civil war, which disrupted agricultural activities and led to Sierra Leone’s hatcheries being abandoned.

Farmers cluster together to build the ponds, which are then managed by individual farmers. Since 2016, 150 ponds with a density of 2.5 tilapia fry per m2 have been constructed, or are undergoing construction or rehabilitation work in inland wetlands, creating an ecosystem capable of retaining water even during the dry season. According to Colby Silvert, WorldFish project extension coordinator, “This model is promoting semi-intensive fish farming as a small business and should allow small-scale farmers to turn a decent profit.”

In order to help farmers generate additional income and enhance market access, “We train farmers to carry out research about the local markets and secondary outlets such as restaurants,” adds Silvert. “As more fresh fish comes onto the market, there’ll be less need to transport marine fish from Freetown.”

The initiative has also renovated the hatchery in Makali that was destroyed during the civil war to address a major obstacle to the development of aquaculture in the country: the current supply of fry, fingerlings, and fish feed – critical inputs in fish farming – is estimated to meet only 34% of the demand according to WorldFish assessments. The factory, which is owned by the government and employs six people, is being used by WorldFish to select genetically viable species to supply fish fry to farmers.

Smoked marine fish is easy to transport and, when packaged, can fetch between €0.95 and €3.30/kg in rural areas. However, “Fresh fish is higher value, and is more popular with consumers,” explains Paul Bangura, an FAO aquaculture consultant. “Fish from local farms can be transported fresh or still alive straight to local markets in rural areas.”

In 2015 and 2016, FAO and the MFMR launched two projects to build 64 breeding ponds, each 400 m2, in Bo, Kenema, Kono and Tonkolili districts. The ponds are owned and managed by community groups of no more than 30 members, mostly young people. About 800 farmers – 30% of whom are women – have directly benefited from these projects, and 128 have received fish farm management training. The initiative has also delivered training to 16 officials from the fisheries and agriculture ministries, who now have the knowledge and skills to help farmers manage their stock, assess fish quality and bring their products to local markets.

FAO estimates suggest that the 64 ponds will produce 20,000 kg of fresh fish each year in one or two harvests – which represents almost half of the country’s current total annual freshwater fish output of 45,000 kg. A passion for porcine production

Accounting for 38% of worldwide meat production, pork is attracting a new generation of African entrepreneurs – bucking the continent’s traditional aversion to the meat. 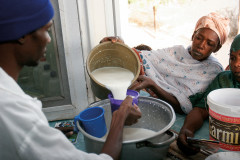 The fifth largest dairy in the world is setting up in Nigeria and Senegal. Arla Foods, a Danish company, intends to increase its revenue in the region fivefold by 2020. What impact will this have on local producers and consumers?