Recognition of the importance and vitality of secondary towns is very recent. These dynamic commercial hubs provide rural areas with markets and opportunities for young people, whilst urbanisation and stronger rural-urban linkages are offering new and value added markets for farmers and entrepreneurs in fresh and processed foods.

The proportion of urban dwellers in Africa has grown from 14% in 1950 to 40% today and is expected to reach 50% by 2030, as reported in the African Economic Outlook 2016. Moreover, the urban population has increased by almost twofold in Africa over the last two decades (from 237 million in 1995 to 472 million in 2015), and will likely double again between 2015 and 2035. The report points out that Africa, like Asia, is urbanising twice as fast as Europe did during the 19th century.

Contrary to some preconceived assumptions, small secondary towns, rather than large capital cities or megacities, are the driving force of this rampant urbanisation. “Between 2000 and 2010, urban agglomerations with fewer than 300,000 inhabitants accounted for 58% of Africa’s urban growth,” the African Economic Outlook 2016 report states. The border between rural and urban areas is also becoming increasingly blurred. The spatial intrusion of towns into rural areas currently accounts for 60% of urbanisation according to the Urbanisation, Rural Transformations and Food Systems: The Role of Small Towns report by the International Institute for Environment and Development and International Fund for Agricultural Development. Roughly 75% of all Africans live in this ‘grey area’ that lies between rural areas and secondary towns.

But only recently has interest been focused on secondary towns, particularly secondary towns. For example, the first World Bank study was carried out just 7 years ago. “A growing number of governments are showing increased interest in these secondary towns and boroughs,” explains Luc Christiaensen, a senior economist at the World Bank. “This is an emerging trend.”

While big cities generate more economic growth because they enable economies of scale, secondary towns are highly dynamic commercial hubs where local farmers come to sell their produce and in turn purchase manufactured goods. The small village of Karatina, located 200 km from Nairobi, hosts at least 1,400 sellers three times a week. Sagana, 100 km from Nairobi, also serves as a centre for the entire area south of Mount Kenya, say Hélène Mainet and Ephantus Kihonge, researchers at the University of Clermont-Ferrand in France, and hosts many major businesses, including the National Cereals Board, Kenya Breweries, a petroleum depot, and the agricultural storehouses of the Kenya Planters Cooperative Union. In West Africa, dynamic rural hubs are generating investment: the market in Doufelgou, northern Togo, was recently completely refurbished and expanded; and in Kaolack, the main town in Senegal’s groundnut growing area, has just been given the go-ahead for the reconstruction of its central market at a cost of FCFA 45 billion (€68.5 million).

Growing links between school canteens and farmers are one example of thriving interactions between secondary towns and rural areas. Initiatives to improve these links are under way and increasing throughout Africa. In the Senegalese town of Kédougou, for example, as part of a 10-year training and education programme launched in 2012, 1,000 farmers are distributing 60% of their harvested rice to over 170 canteens, which has created a fully-fledged distribution chain.

One of the reasons small town markets provide an ideal outlet for farmers’ products is because transport costs are minimal, thus ensuring that they will recover a larger share of the end-product value. According to the NGO, Research for Community Access Partnership, transport costs represent 27.5% of the average market price of agricultural products in Kenya and Malawi. In Mount Meru, Tanzania, coffee growers have halted their usual activity in order to grow vegetables to sell in local urban markets, with gross margins of up to €4,250 per harvest. Less transport also means reduced product loss and in turn, higher incomes.

Secondary towns are becoming more accessible to rural youth while offering them an opportunity to fulfil their desire for urban life. About 60% of the 230 million young people in sub-Saharan Africa live in rural areas, but many see very few opportunities in the agricultural sector, where wages are low and uncertain, and people have little access to land, financial services and the internet. So they often leave and head to the nearest small town, while regularly returning to their villages, bringing back money, new ideas and vitality. Christiaensen stresses that without secondary towns many people would not have any activity opportunities or potential destinations for migration.

Closer contact with increasingly demanding urban consumers is enabling farmers to sell their products with greater added value, said Steve Wiggins, research fellow at UK’s Overseas Development Institute, during a Brussels Policy Briefing on rural-urban linkages in Africa. These farmers are hence able to sell their products more easily – and often informally but efficiently, claims Wiggins – in small town markets than in the supermarkets of large cities where market standards are harder to meet.

This closer contact with urban consumers – often rushed and seeking ready-made foods – is also encouraging rural farmers to sell higher value added ‘convenience’ foods. “With their lifestyle, urban dwellers need processed ready-made products,” says Mamadou Cissokho, honorary president of the network of West African farmers’ and producers’ organisations, Réseau des Organisations Paysannes et des Producteurs de l'Afrique de l'Ouest, in the book Nourrir les villes, défi de l'agriculture familiale. “Everyone is aware that food processing is essential because, even in rural areas, a woman will prefer to buy ready-made couscous (if she finds it) rather than going through the process of making it herself with a mortar and pestle. So rural women have triggered a major change in this respect.” Cissokho goes on to say that women have also – by equipping themselves and creating added value – “progressed in the processing of agricultural products. Many small processing units are thus now found throughout rural and periurban areas. You can find ready-made fonio, couscous and porridge – a range of products that require a lot of work to make but can now be bought ready-made.”

Diets of urban people are also changing, with higher proportions of fruit, vegetables, meat and fish, as well as processed products. Young urbanites are creating their own food culture using local agricultural products, which Nicolas Bricas, researcher at the French Agricultural Research Centre for International Development, refers to as a ‘food modernity’ trend. For example, in Cote d’Ivoire, La garba is an Abdijanian invention made from cassava, fish and condiments. This dish, which is made with local produce, is popular with young people. But he underscores the importance of ensuring that this trend is balanced between towns and rural areas so that the setting of prices and terms will not be monopolised by the towns. He explains that in Vietnam, for example, Hanoi is trying to organise solidarity contracts with rural areas to guarantee a supply of quality products while investing in the rural and agricultural development of supply areas. “African countries are faced with a choice: to rapidly industrialise the sector to access what some consider to be food modernity, with the risk of creating relatively few jobs, or the other option, which consists of relying on a network of small enterprises, thus generating thousands of jobs,” Bricas states.

The development of secondary towns is leading governments to decentralise or create more local branches of large public enterprises, which also encourages private companies to expand into secondary towns. This provides greater access – without a need to travel to capital cities, which is often time-consuming and expensive – to inputs, equipment, training, schools, and financial, advisory and health services. The Botswanan supermarket chain, Choppies, which has been well established throughout southern Africa for over 15 years, has been expanding into secondary towns and semiurban areas, while also offering a range of ancillary mobile money and currency transfer services. This expansion has been highly successful, with its revenues increasing by 34% during the second half of 2016. The group has also moved its distribution hub in Botswana from Lobatse, 75 km from Gaborone, to Francistown, a town of about 120,000 inhabitants in the north of the country.

The revolution of secondary towns is under way, but the challenges are daunting. The first clearly concerns land, with the encroachment of towns into the countryside. Secondary towns are generally overcrowded, with poor housing, inadequate low-density public transport and infrastructure, unreliable internet connectivity and above all, a high cost of living. Water supplies and sanitation are also problematic. In secondary towns in Senegal, 68% of households are connected to the water supply system, while the remaining 32% depend on water hydrants. Only 36.7% of households have basic sanitation (toilets, septic tanks). Outside of Dakar, only Kaolack, Louga, Mbour, Rufisque, Saint Louis, Sally and Thiès, have even partial access to a sewer system, so household waste management is incredibly complicated.

Less than 20% of cities and towns have an urban plan, which even if available, is generally obsolete or not implemented due to the lack of urban management capabilities in local communities. However, human capacity building in small towns is being strengthened. With German support, decentralisation reform is progressing in Ghana, with the aim of enhancing knowledge and control of local planning, while determining how to generate revenue and organise public services in 40 districts, including 25 towns. Streets are being named as a way to identify residents and businesses, thus providing a basis for local taxation to enable investment. Innovative participatory methods are also being developed to ensure that planning is more inclusive, while being especially responsive to women’s needs. 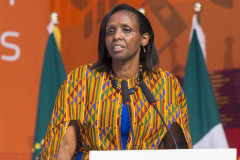