Natural resources in the Caribbean remain largely untapped, but with biomass and biofuels there is great potential for renewable energy and opportunities for agriculture.

The Caribbean region has one of the world’s highest per person energy costs with residential electricity tariffs as high as €0.3/kWh, while the world average hovers at €0.12. Relying mainly on diesel and heavy fuel oil imports, regional national budgets are burdened by expensive fuel sources and exposed to price fluctuations.

Guyana and Montserrat spend as much as 25% of GDP on energy imports, while Trinidad and Tobago, as a global exporter of fossil fuels, remains the regional exception to the rule. Agriculture energy demand in the Caribbean is generally much lower than for transport, manufacturing and other commercial and domestic usage; however in Guyana, Jamaica and Suriname, the farming, fishing and mining sectors utilise between 10 to 25% of total primary energy consumption, and inefficiencies in agro-processing across the region further intensify energy costs.

For the region’s low-lying states the threat of climate change looms large; sea-level rise, reduced food security, increased water scarcity and the frequency and strength of storms are tied directly to global warming. Haiti has been cited as one of the world’s most vulnerable nations to climate change. However, climate-smart agriculture, including biofertilisers, drip irrigation, soil conservation, reforestation and greenhouse farming has transformative potential for mitigating these threats.

To address the region’s energy security future and diversify its energy matrix, the Caribbean Community (CARICOM) committed in 2013 to generate 48% of its power through renewables by 2027 and to reduce its energy intensity by 33%, which will result in a 46% reduction in current carbon dioxide emissions. Following adoption of the CARICOM Regional Energy Policy in 2013, the Secretariat commissioned the Caribbean Sustainable Energy Roadmap and Strategy (C-SERMS) report. Launched in October 2015, this provides the first-ever comprehensive installed and potential renewable energy capacity, along with recommendations outlining a pathway for CARICOM to achieve these targets.

In 2015 CARICOM had a total installed power capacity of 5,787.3 MW with only 7.9% produced by renewables, yet C-SERMS highlights the region’s untapped renewable energy potential, with minimum proven potential for hydro as a result of climate change impacts. Bagasse, coffee husks, rice straw and coconut shells are also potential sources of biomass feedstock. However, while biomass is a viable agroenergy option, there are associated negative effects such as the impact on local food prices, water usage and being energy intensive to produce. In Haiti, for example, over-reliance on traditional biomass (wood and charcoal) has resulted in 97% reduction of its forest cover (in 2006 forest cover was only 2% compared to 60% in 1923) with disastrous consequences for agricultural development; each year Haiti loses an estimated 6,000 ha of soil due to erosion.

Additional options for achieving agricultural sustainability include efficient irrigation systems, crop waste management, land use techniques, use of waste for energy as biomass and biofuel (e.g. for example biodigesters), and wind and solar energy, including solar crop dryers and solar water pumps.

In its proactive pursuit of climate-smart agriculture, the Belle Vue Farmers’ Cooperative of 300 members in Saint Lucia constructed a biogas digester and is now producing compost and liquid fertiliser from animal waste, which is then incorporated into the farm’s operations. A separate business arm, St. Lucia Compost, produces over 10 t per year. The compost is used on their organic farm and by its member farmers. The Cooperative also has a 75 m3 storage tank which collects rain-water and is then re-distributed to the seedling nursery using a solar pump.

Although most Caribbean countries now have concrete mechanisms and incentives for independent power producers, which includes generation incentives, there is still work to be done on maximising energy efficiency, renewable energy in transport and providing incentives for harnessing renewable energy in rural areas. With the exception of Suriname, all Caribbean nations have agreed to renewable energy and renewable electricity targets. Most regional territories (with the exception of the Bahamas, Grenada, Montserrat and Suriname) have also agreed energy efficiency targets and CARICOM countries are also in the process of establishing policies and plans.

Goodfellow Farms in the Bahamas is already ahead of the curve to achieve energy efficiency with its aquaponics (raising fish with vegetables grown by hydroponics) production. In 2014, the company invested in optimisation of its systems, procedures and business model, making it sustainable and energy efficient. Energy efficient products and processes used in their greenhouses are: aluminet shade curtain to heat and create shade for the crops; roof glazing which generates a diffused light for optimal plant growth; growing troughs and fish tanks are all insulated, lowering the water temperature and allow-ing the farm to grow crops which would not normally grow in the Bahamas; and efficient water pumps and aeration pump-ing systems.

Making use of rainwater capture, the company currently uses 90% less water than a traditional farm, resulting in reduced energy requirements for crop production. Other energy efficient products and processes incorporated in the greenhouse operations are lighting, controls and use of glazing.

At its 500 m2 greenhouse, inverter batteries are used as a backup system, with plans for a solar plant in the future. Despite these innovative initiatives, there is an urgent need for greater investment to use alternative and renewable energy for agriculture. Funding of projects continues to be a challenge so markets are looking to public-private partnerships (PPPs), with Haiti and Jamaica having successfully undertaken renewable energy projects.

There are a number of additional opportunities in replicating Jamaica’s renew-able energy auction model, as well as in waste-to-energy, wind (Windwatt Nevis) and geothermal. In late 2016, the Caribbean Development Bank (CDB) will launch its PPP toolkit and a net-work of regional PPP practitioners to assist member countries to progress PPP projects. CARICOM requires €18 billion in energy investment in order to achieve its renewable energy targets. EU sup-port of €135 million for the Caribbean Investment Facility, which encourages private sector involvement in renewable energy projects, and €30 million from CDB and the French development agency, AFD, towards financing sustainable infrastructure projects in the region are welcome initiatives. Further transformation of the energy sector in the Caribbean is also being fostered by a multi-donor €63.75 million fund – the Sustainable Energy Facility for the Eastern Caribbean. Signed in October 2015 by CDB and the Inter-American Development Bank, the initiative is to facilitate growth in the renewable energy sector. A key component of this facility is concessional financing from the Clean Technology Fund. The Caribbean Centre for Renewable Energy and Energy Efficiency, inaugurated in July 2016, will also undertake renewable energy and energy efficiency research and development. With the implementation of these new initiatives, there is potential for repositioning the agriculture sector from an energy consumer to a significant contributor to regional energy security. 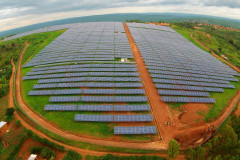 Energy transition is needed to mitigate climate change and meet the growing needs of the agriculture sector. New technologies are providing some innovative solutions. Energy is not an end in itself The energy and agriculture challenge

Energy access is essential for agricultural growth throughout ACP countries – but the change from fossil fuels to renewables is not without its challenges.